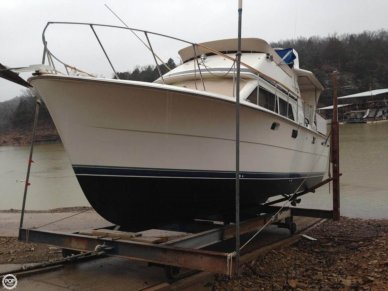 She has been custom re-powered for cruising with a very efficient fuel burn.

The current owner has only used her for overnights on the dock and short overnight tr...more

We're sorry to see this one go but happy to say that she has been sold.

She has been custom re-powered for cruising with a very efficient fuel burn.

The current owner has only used her for overnights on the dock and short overnight trips on the water in the two years he has owned her.

She currently holds 503 gallons of fuel - and has 300 in the tanks, which will be included in the sale.

The most recent haul-out was in May 2016. At this time, the bottom was painted, zincs were replaced and the props were re-pitched and fine-tuned.

Since re-pitching, she runs 9mph at 2000 rpm. She can now be run all day at 2800 rpms with the new props installed. Current fuel burn of both engines and generator is 3 gph at 8 to 9 mph. It has been suggested that the vessel would get even better fuel burn with 21"x 19" props. These could be added for around $900 each, new. This would speed the boat up to around 14 mph while still using an estimated 3 gph. It would also be possible to add turbos to get 20 more HP out of the engines.

At the last haul-out, the trim tabs motors and lines were replaced with new.

Approximately four years ago, this boat was being set up to do the Great Loop.

To accommodate this journey, both black water holding tanks were pulled along with the heads, which provided more room for an extra fuel tank. It also allowed more room in the master bathroom head. The original head was replaced by a new incinerator toilet in the front shower stall, with the shower and sink remaining in-tact. It is still possible to install an RV-style head if needed.

The interior has retained its beautiful original features with lots of stunning woodwork and good lighting. There is a custom removable rug on the rear deck and a custom upper helm cover and rear door cover.

Electronics include a depth sounder, knot meter and radio (which is currently not working.) There is also an air horn with a small air compressor that pumps up a Freon can for air pressure.

This very neat, clean and solid boat is ready for the Great Loop or local adventures!

Overall, according to the seller, everything on the boat is in good working order with no known issues.

All gauges up top work.

There are three new Batteries.

The Borg Warner Velvet straight drives have recently had all fluids changed.

Neutral lights have been added to the port side.

The cassette player in the AM/FM radio does not work. There are about 4 knobs for adjusting the speaker volume throughout the boat with 6 or 8 speakers inside and out.

The tachometers below were never converted from gas to diesel like the ones up top.

The dual marine AC units work well. A small 5,000BTU window unit has also been added which can easily be removed. It has been secured with wood and no screws to avoid any long-term scars.

The two TVs and marine antenna all work well.

Fuel can be transferred by a 15gph transfer pump (with filter) from one of the auxiliary tanks to the main 60 gallon tank. There are also extra fuel and oil filters.

On the rear deck, there is a nice swing down table for entertaining guests.

We have several active listings for Sea Ray, Chris-Craft, Carver, and Hatteras. If you're in the Fort Smith, Fayetteville, Muskogee, or Van Buren areas, please use the form on this page to let me know what you're looking for and I'll get back with you today about any other aft cabin yacht / sportfish/convertibles options we have locally that may meet your needs. 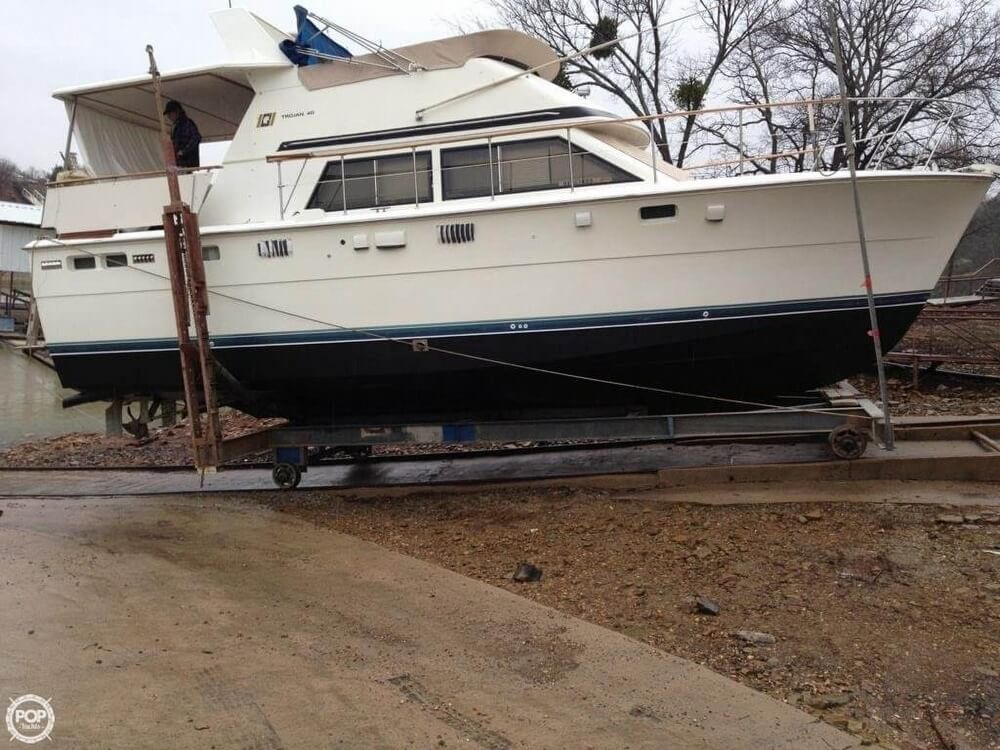 In order to see all 63 photos and more, please quickly create an account. It just takes a second and you will have unlimited access to view information for this listing and ALL others on the website.

In order to see all 63 photos, download a brochure, and more, please quickly create an account. It just takes a second and you will have unlimited access to view information for this listing and ALL others on the website.

† Engine hours were last recorded on 12/3/2017, and may not reflect the most recent readings. Please contact us if you would like up-to-date information.

†† Storage status was last confirmed on 12/11/2017, and may not reflect the most current status. Please contact us if you would like up-to-date information.

†††† The ad was last updated on 5/21/2019 and hull hours may not reflect the most recent readings. Please contact us if you would like up-to-date information.

Similar Boats to the Trojan F-40 For Sale

In order to see the advanced metrics, all 63 photos, download a brochure, and more, please quickly create an account. It just takes a second and you will have unlimited access to view information for this listing and ALL others on the website. If you don't use social media, click here to register with your email.