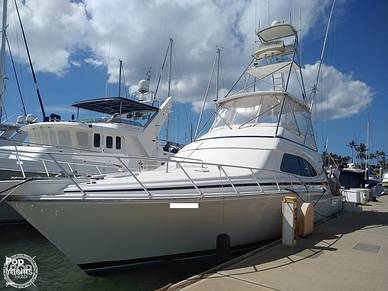 155 photos
$510,000
Available
Year
2005
Brand
Bertram
Model
510
Type
Sportfish/Convertible
Length
54' 10"
Hours
1,850
You will be impressed by every aspect of this stunning vessel! She has been exceptionally well cared for and in excellent condition for her age and usage. Bertram hit the jackpot here designing the perfect luxury family yacht, world-class offshore fishing boat, versatile dive platform and affordable liveaboard or floating condo. This is your floating holiday home with all ocean excursions included. The twin 4-cycle 6-cylinder turbo charged Caterpillar C-18s provide 1015 HP of power to easily navigate even the largest of Hawaiian swells. Engine hours are currently 1850. Walking aboa...
Last updated on 3/23/2021 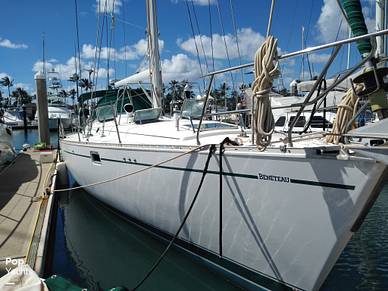 235 photos
$144,000
Available
Year
1992
Brand
Beneteau
Model
Oceanis 510
Type
Sloop
Length
50' 3"
Hours
80D Perkins 4236
What an incredibly impressive vessel! Not only has she been very well maintained but she is fully kitted out for whatever adventure you're dreaming of! This sleek cruiser is ready for serious bluewater cruising, casual sailing or memorable inter-island overnighters in comfort and style. She will also make the perfect full-time liveaboard, floating condo in the South Pacific or charter boat. Mechanically, the fresh-water cooled engine with engine alarm and 3-blade Max-Prop amply powers this vessel. The two automatic and 1 manual bilge pump protects the engine compartment. For lon...
Last updated on 4/1/2021 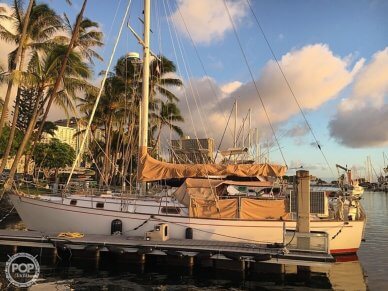 163 photos
$83,400
$75,000
Available
Year
1977
Brand
Kelly Peterson
Model
KP44
Type
Sloop
Length
44'
Hours
1,600
This 1977 Kelly Peterson KP 44 Center Cockpit Sloop is in good condition for her age and usage and has been very well-loved and maintained by her current liveaboard owners. She will make a wonderful floating condo in beautiful Hawaii, the perfect inter-island cruiser, or a solid and dependable world sailor! She is a very impressive, exquisite classic which still has a modern feel. Very bright and clean throughout! The desirable center cockpit has beautiful teak and provides a smooth, comfortable, and safe ride, especially in Hawaiian swells. She is being offered for sale as the ...
Last updated on 4/2/2021 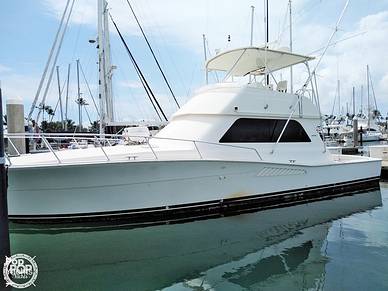 1 video
$299,000
$234,000
Available
Year
1998
Brand
Viking
Model
47
Type
Sportfish/Convertible
Length
47' 2"
Hours
60
This 47' Viking Sportfish Convertible was built in 1998 with twin MAN 800-HP, 8-cyl. turbo-charged diesels. Both engines were rebuilt in late 2016/early 2017 by a MAN specialist from Kona. There have only been 60 HOURS SINCE REBUILD! August 2018 survey valued her at $299k! She's priced to sell and all serious, reasonable offers will be considered. Her design consists of a raked stem, modified vee forward with hard chines aft, flush foredeck, raised cabin with flybridge above, open cockpit, and square transom. Forward below deck, an anchor locker is followed by the master cabin wi...
Last updated on 4/13/2021
Honolulu, HI (5)
Kapolei, HI (3)
Kaneohe, HI (1)
Kaaawa, HI (1)