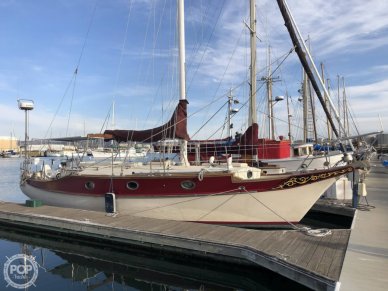 If you have any questions, Scott can be reached directly at (510) 736-4701 to further discuss the situation.

This CSY has the tall rig and deeper keel options

With her raised deck amidships, the CSY 37 has an amazing amount of deck space, giving the on-deck impression of a small ship. There is plenty of space on deck to carry a rigid dinghy.

There are heavy travelers for both the main and the staysail located on the main deck.

The cockpit is large for an offshore boat. The large cockpit lockers are well divided and are partitioned from the engine space under the cockpit.

The interior volume of the CSY 37 is huge, thanks to the raised deck. This CSY has the interior arranged with a two-stateroom, two-head layout. There are many well-thought-out interior details like the icebox being divided into two compartments with separate opening traps. The icebox has a minimum of 4 inches of urethane foam insulation, probably more than any other stock boat on the market of this era.

As could be expected of a boat designed for the Caribbean charter trade, ventilation of the interior is excellent. There are six opening hatches or skylights in addition to the companionway.

The construction of the CSY 37 has been described as massive overkill. The vessel has a very strong, heavy hull. Forty percent of the CSY 37s advertised displacement is in the ballast keel. With a 29-foot waterline, the displacement of about 20,000 pounds is average by traditional standards, heavy by modern standards.

The hull is an extraordinarily heavy, solid-glass layup, as is the deck-almost never seen today. No core materials are used anywhere.

The hull-to-deck joint is simple and effective. The hull and deck flanges, which overlap to form a molded rail, are bedded in 3M 5200 and through-bolted with stainless-steel machine screws on 4-inch centers.

Keel construction is unusual. The cast-lead keel is glassed into the hollow keel molding, any voids being filled with fiberglass slurry. This is then glassed over to form a double bottom and to keep the ballast in place.

The CSY 37 is a strongly built-overly built vessel. CSY boats were considered by many to be the strongest production boats ever marketed.

This vessel is in very good condition for her age. The World sailor owner has performed constant upgrades and maintenance throughout his ownership. These include Frig Freezer replacement, new solar panel and inverter/battery tender, new standing rigging, new anchor windlass, new autopilot, new Garmin plotter/radar, and constant varnish throughout.

We have several active listings for Beneteau, Morgan, Irwin Yachts, and Pearson. If you're in the San Jose, San Francisco, Oakland, or Stockton areas, please use the form on this page to let me know what you're looking for and I'll get back with you today about any other cutter sailboat / cruiser options we have locally that may meet your needs.

I'm Up Late
Have a Question?
This boat is on people's minds. It's been viewed times in the past week.
Shop With Confidence!
Our company has the proud distinction of being on the Inc. 5000 Fastest Growing Companies list.
There is a review of this boat model 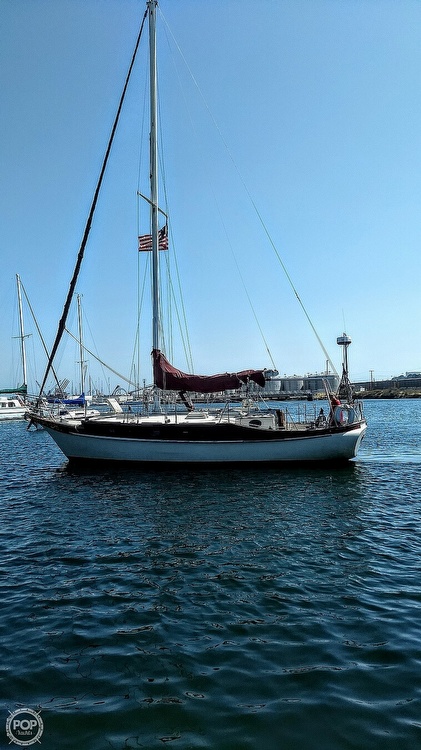 In order to see all 284 photos and more, please quickly create an account. It just takes a second and you will have unlimited access to view information for this listing and ALL others on the website.

In order to see all 284 photos, download a brochure, and more, please quickly create an account. It just takes a second and you will have unlimited access to view information for this listing and ALL others on the website.

Check out this 1979 37' CSY in Richmond, California! #CSY #popyachts https://www.popyachts.com/cutter-sailboats-for-sale/csy-37-in-richmond-california-222590

† Engine hours were last recorded on 9/30/2020, and may not reflect the most recent readings. Please contact us if you would like up-to-date information.

†† Storage status was last confirmed on 9/4/2020, and may not reflect the most current status. Please contact us if you would like up-to-date information.

Similar Boats to the CSY 37 For Sale

In order to see the advanced metrics, all 284 photos, download a brochure, and more, please quickly create an account. It just takes a second and you will have unlimited access to view information for this listing and ALL others on the website. If you don't use social media, click here to register with your email.