The 1961 Huckins 60' is a true endeavor with the passion for a romantic elegance restored to timeless beauty.

Innovators who changed the way things were done, showed the impossible to be possible and whose legacies are integral within the foundations of what is today taken for granted, whet...more

The 1961 Huckins 60' is a true endeavor with the passion for a romantic elegance restored to timeless beauty.

Innovators who changed the way things were done, showed the impossible to be possible and whose legacies are integral within the foundations of what is today taken for granted, whether it be the first practical and affordable private jet, a revolutionary hull design that gave a smooth, fast and dry ride like none before, or designing the earliest planning hulls including the legendary PT boat and later among the first pioneers to sheath wooden hulls in fiberglass.

For over nine decades and several generations of pleasure boat evolution and refinement Huckins has been there all along, still in the family, still innovating, still preserving, still striking the right balance between that which offers new possibilities and that which assures known qualities. Possibilities such as lighter weight, tighter construction tolerances or greater performance and efficiency, qualities such as reputation, durability and classic good looks.

As is always the case among those who remain in business, let alone in the top tier for generations, it requires walking the high wire between the radical and the rational, a balancing act perhaps only made possible by generations of family ownership, a series of steady hands on the tiller sharing a common gene pool.

Which brings us to the subject vessel at hand, the 1961 Huckins Linwood sixty footer, if not the finest example of the brand certainly one of them. Purchased first as an object of love by the current owner, she then became a mission and eventually an obsession, and just as it takes a special breed of innovator to give birth to a classic, it is often the case that love and obsession, not to mention sufficient means, are necessary attributes among those who wish to preserve them.

Thus the mission became the total restoration of the vessel to her finest, few expenses spared, no lack of sand in the hourglass. The entire exterior hull was stripped of glass to the bare wood, completely refastened and then re-covered with West System Epoxy and 18oz bi-axial cloth. The keel and chine were reinforced with four layers of cloth, and all the topsides and decking with 10oz cloth.

The structural necessities having been addressed, the more remarkable aspect of the project was restoring the power configuration to original. You see, among her past interesting owners was a drug running operation that doubtless appreciated her fine seaworthy qualities and speed, so much so that they reconfigured her to straight inboard with a dummy fuel tank sealed with contraband abaft, then loaded her topsides with bales of marijuana and abandoned her off the coast of Florida... whereupon the Coast Guard seized her and impounded her conveniently on land where the clever villains were able to sneak in under the cover of darkness, cut open the fake tank and recover the real contraband... yet another example of innovation by those obviously at the top of their game. So, out went that renegade power package and in came a pair of 12-V71 TI Diesel

The mission is to reconstruct, restore and refit her as classic vessel to cruise 20 knots operating around 29 gallons/hour.

All new half shafts, couplings, etc.

She is currently on the hard having the bottom sanded and painted for the 2019 Season.

We are planning to revisit and for detailed photos and video May 2019.

We have several active listings for Chris-Craft, Hatteras, Sea Ray, and Ocean Yachts. If you're in the Providence, New Haven, Hartford, or Waterbury areas, please use the form on this page to let me know what you're looking for and I'll get back with you today about any other motor yacht / antique and classic options we have locally that may meet your needs.

I'm Up Late
Have a Question?
This boat is on people's minds. It's been viewed times in the past week.
Shop With Confidence!
Our company has the proud distinction of being on the Inc. 5000 Fastest Growing Companies list. 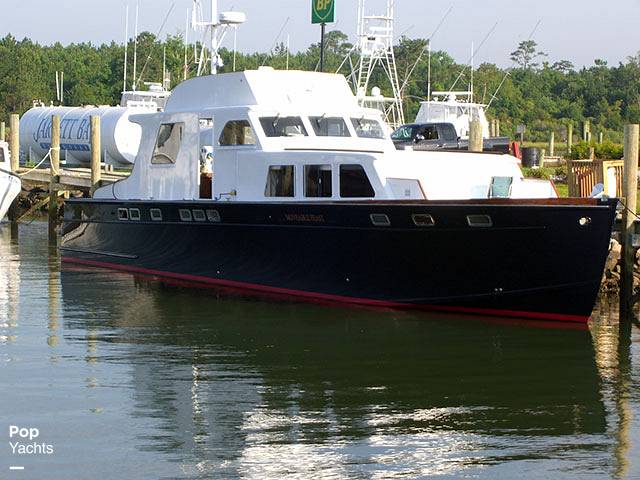 In order to see all 36 photos and more, please quickly create an account. It just takes a second and you will have unlimited access to view information for this listing and ALL others on the website.

In order to see all 36 photos, download a brochure, and more, please quickly create an account. It just takes a second and you will have unlimited access to view information for this listing and ALL others on the website.

One of our experts will contact you to finalize your offer.

All offers are contingent upon the buyer being fully satisfied after the results of a personal and/or professional inspection.

Check out this 1961 Huckins Linwood in Mystic, Connecticut! #popyachts https://www.popyachts.com/motor-yachts-for-sale/huckins-linwood-in-mystic-connecticut-r2-148944

† Engine hours were last recorded on 5/9/2018, and may not reflect the most recent readings. Please contact us if you would like up-to-date information.

†† Storage status was last confirmed on 5/6/2018, and may not reflect the most current status. Please contact us if you would like up-to-date information.

Similar Boats to the Huckins Linwood For Sale

In order to see the advanced metrics, all 36 photos, download a brochure, and more, please quickly create an account. It just takes a second and you will have unlimited access to view information for this listing and ALL others on the website. If you don't use social media, click here to register with your email.