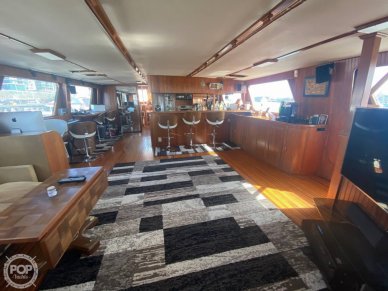 She is powered by twin Detroit Diesel 8V92TA engines, each rated at 735HP and driven throu...more

If you have any questions, Alan can be reached directly at (415) 793-9433 to further discuss the situation.

She is powered by twin Detroit Diesel 8V92TA engines, each rated at 735HP and driven through Allison marine gears. Engine hours are roughly 2500. She swings 3-bladed bronze propellers on 2 1/2" stainless shafts. An extra set of 4-bladed props have recently been overhauled and balanced and are included. The engines have received signifiant service within the last 2 years, including full overhaul of the cooling systems and overhaul of all fuel lines and filters.

Virtually every single hose on the vessel has been replaced since 2015.

The potable water system has been modernized with dedicated cold/ hot manifolds and the majority is Wirsbo Aquapex plumbing. The system contains no rubber hose under constant pressure. The hot water heater was new in 2017. The system allows for dockside pressurized water to feed the system, from inlets on the port and starboard sides. A Marco 10GPM gear pump provides pressure while away from the dock.

A Cummins/ Onan 20KW genset provides 120V/ 240V AC power away from the dock. The genset has been modernized with modern DynaGen control and recently received a full service, including the heat exchanger being overhauled. Genset hours are roughly 3000.

Both port and starboard sides have dual 50A shorepower inlets. The dedicated 240V service can be separated from the 120V panels, if dual shore supplies are found at whatever marina the vessel is docked at.

A 1000 amp-hour (comprised of 4 8D batteries) AGM house battery bank is charged by a Magnum pure sinewave 2800W inverter/ charger, which also provides power for the refrigeration when the genset is not running.

All major DC wiring has been replaced since 2015.

The engines are started by a pair of TPPL AGM Group 31 batteries, and the bow thruster contains its own AGM battery bank (a pair of Group 27 batteries). Both are charged by a Promariner Pronautic digital charger.

A Village Marine watermaker is located in the engine room.

Climate control is provided by separate, direct expansion systems with reverse cycle heat. The zones include pilothouse, salon, VIP, crew, and master. The salon system is 30,000BTU while all others are 12,000 BTU. All zones are separately controlled by modern, MarineAir Elite digital controls. All condensing units except for the crew have been upgraded to modern compressors.

She carries 1200 gallons of fuel in recently overhauled fuel tanks. The tanks were opened, cleaned, sandblasted, and epoxy lined with specific fuel/ chemical resistant tank lining epoxy. This vessel will never have fuel tank problems (this was a $25,000 project and was done to avoid any issues going forward).

The fuel tanks have a Maretron tank level system, that is accurate to roughly 2% accuracy ($4000 was spent on this solution). The readout is in the engineer's workshop, but as the system outputs NMEA-2000 data, were the helms to be modernized with new glass panel displays, they would read there as well.

The polishing/ transfer system allows for fuel to be continually filtered, as well as to move fuel from side side, which greatly eases fueling (as you only have to pull up to the fuel dock once, and fuel from one side, while pumping to the other). The pump moves fuel at roughly 20 gallons per minute, while removing any moisture from the fuel and filtering down to .3 micron (yes, ZERO POINT THREE- this is aviation grade fuel filtering). There is likely a lifetime supply of filter media included.


She carries 400 gallons of potable water underneath the master bed in a stainless steel tank.

There is a day head off the pilothouse.

To starboard, next to the crew accommodations, is the engineer's workshop, which contains work benches, toolboxes, cabinets, as well as the fuel polishing/ transferring equipment.

To port is the laundry room, which contains a 5.5 cubic foot, modern steam cycle, all in one washer/ dryer.

Aft of the workbench/ laundry room is the full height, walk in engine room.

Aft of the engine room is the Master stateroom.

On the main deck, aft of the pilothouse is the galley, which contains a full size refrigerator/ freezer, electric range with connection oven, dishwasher, and trash compactor. The galley sink is equipped with a GE disposal. The galley is partially divided from the salon by a breakfast bar/ counter.

The salon is full beam, and measures roughly 30' by 18'. The salon contains a 4K LED TV, Definitive Technology 5.1 channel surround sound system with M&K subwoofer, and couch, as well as a day desk. To port is another counter that looks out one of the large salon windows.

The salon features large, direct glazed windows with solar coating (this was a $20,000 project). The pilothouse windows are original and have been overhauled and re-bedded into the boat.

Aft of the salon is the aft deck, complete with boarding ladder down to the swim platform. The aft deck contains a bar sink and ice maker.

Accessible from either the pilothouse of the aft deck, is the expansive flybridge. The flybridge contains a full helm station, while the aft section of the flybridge contains a built in stainless steel propane grill. There is also a permanently mounted pressure washer in the cabinet, which feeds off the vessel's potable water, and has a 75' hose that allows one to clean the whole boat without moving the pressure washer.

Just about all lighting on the vessel in LED.

The exterior of the vessel has benefitted from recent paint on the flybridge, recent flybridge deck surface lining, and paint on the salon exterior superstructure.
She was last hauled in 2016 and those pictures are included here for viewing. She will be due for bottom paint again within the next 12 months. If we keep the vessel, we will be installing a new bow thruster at the next haul, as well as a stern thruster (stern thruster is sitting in a box and is included).

USCG recreational documentation is good until 2026.

There are some continued projects that are not finished, mainly involving interior joinery work. The teak decks need to be refinished, and there are areas around the salon windows where old water damage still needs to be repaired (from leakage prior to the installation of the new salon windows). The headliner in the salon would be a nice project to re-do with modern fiber optic lighting.

She would make an incredible live aboard or escape machine to run back and forth to Cabo (and beyond). Over $100,000 has been spent on improvements within the last 5 years. With another $50k-$100k smartly invested she would truly look like a million dollar boat.

Personal items and tools are NOT included.

The 13' RIB tender and 15HP outboard is NOT included.

Condition is addressed in the above detailed description. Significant electrical, mechanical, and cosmetic upgrades have been performed.

Some projects remain but the vessel is well powered and can be captained as she sits.

We have several active listings for Sea Ray, Hatteras, Chris-Craft, and Carver. If you're in the San Jose, San Francisco, Stockton, or Fremont areas, please use the form on this page to let me know what you're looking for and I'll get back with you today about any other motor yacht / aft cabins options we have locally that may meet your needs. 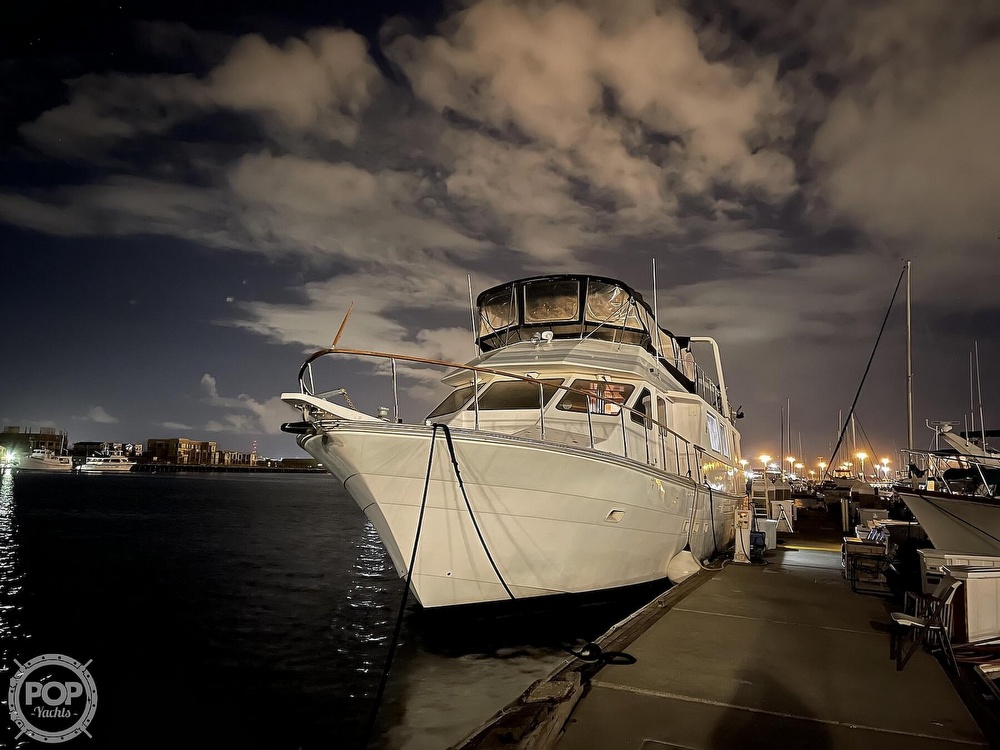 In order to see all 215 photos and more, please quickly create an account. It just takes a second and you will have unlimited access to view information for this listing and ALL others on the website.

In order to see all 215 photos, download a brochure, and more, please quickly create an account. It just takes a second and you will have unlimited access to view information for this listing and ALL others on the website.

†† Storage status may not reflect the most current status. Please contact us if you would like up-to-date information.

†††† The ad was last updated on 6/12/2021 and hull hours may not reflect the most recent readings. Please contact us if you would like up-to-date information.

Similar Boats to the Kha Shing Silver Star For Sale

In order to see the advanced metrics, all 215 photos, download a brochure, and more, please quickly create an account. It just takes a second and you will have unlimited access to view information for this listing and ALL others on the website. If you don't use social media, click here to register with your email.