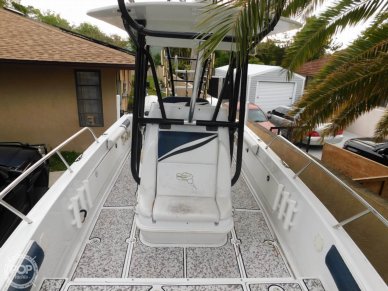 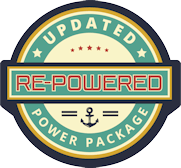 We are proud to label this boat sold. Tampa, FL!

When the owner first purchased the boat in 2014, he did a major overhall in which removed and put in a new center console with tower and he also had the hull painted and non-skid decking applied.

At the time of replacing the engines, he also had installed a 12" Garmin touch screen on the console.

This Power Catamaran serves double-duty as both fishing platform and family runabout. Fishing appointments include a large, circular baitwell on centerline in the transom and fish boxes amidships to port and starboard as well as several more in bow.

The well-padded cockpit coaming pads meet your legs just above the knee, leaving plenty of room beneath for your feet to keep your center of gravity inboard.

There is room under the console for a porta-potty (it would be a tight fit, but doable) but one is not included.

There is about a half-inch nick on the gelcoat on the front of the starboard hull which was damaged by a friend driving the boat hard onto the trailer.

On the sides of the bottom of both hulls is glue remaining from where there had been rubber pads which peal right off.

The boat was dirty when I visited and I will return to photograph again, once the seller gets her cleaned.

We have several active listings for Sea Ray, Wellcraft, Grady-White, and Pro-Line. If you're in the Port St. Lucie, West Palm Beach, Boca Raton, or Boynton Beach areas, please use the form on this page to let me know what you're looking for and I'll get back with you today about any other power catamaran / center consoles options we have locally that may meet your needs.

In order to see all 185 photos, a video, and more, please quickly create an account. It just takes a second and you will have unlimited access to view information for this listing and ALL others on the website.

In order to see all 185 photos, a video, download a brochure, and more, please quickly create an account. It just takes a second and you will have unlimited access to view information for this listing and ALL others on the website.

† Engine hours were last recorded on 3/12/2020, and may not reflect the most recent readings. Please contact us if you would like up-to-date information.

†† Storage status was last confirmed on 3/22/2020, and may not reflect the most current status. Please contact us if you would like up-to-date information.

This listing shows one or more badges above. These are displayed based on material statements and information provided to us by the the vessel owner. If this proves to be inaccurate, buyer's sole remedy will be against the vessel owner.

Similar Boats to the Aquasport 230 Tournament Cat For Sale

In order to see all 185 photos, download a brochure, and more, please quickly create an account. It just takes a second and you will have unlimited access to view information for this listing and ALL others on the website. If you don't use social media, click here to register with your email.