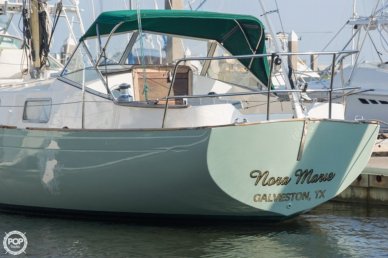 On August 26th, the eye wall of Hurricane Harvey made landfall near Port Aransas, Texas as a category 4 storm with sustained winds of 130 mph. The MONSUN was berthed in Port Aransas and sustained damage from the storm, but far less than you might expect.

We are proud to label this boat sold. Hope to see you in Austin, Texas!

On August 26th, the eye wall of Hurricane Harvey made landfall near Port Aransas, Texas as a category 4 storm with sustained winds of 130 mph. The MONSUN was berthed in Port Aransas and sustained damage from the storm, but far less than you might expect.

The pier she was tied to completely disappeared! When the pier disappeared, so did many of the boats moored to it.

But not this majestic sailboat! She remained afloat and withstood the surges, the 130 mile per hour winds, and flying debris..

Caused primarily by abrasion from nearby boats, the majority of the damage was cosmetic in nature impacting the hull sides. Damage was also sustained to the teak cap-rail, stanchions, port side top lifeline, and deck paint. The only damage to the rig was a torn line used to raise the lazy jacks. The interior sustained no damage and minimal water entry which occurred as Nora Marie took 130 mph winds from the stern and into the cockpit. Photographs of the damage are below followed by photographs of damage sustained to the marina. We were incredibly fortunate with the minimal damage to this vessel, but also believe that her high build quality resulted in substantial resilience to the hurricane conditions. The experience demonstrates the pedigree of a Hallberg-Rassy. With a properly prepared crew, she would have likely experienced little damage if at sea during the same storm. She remains for sale, and the asking price has been reduced in consideration of the repairs which are necessary to return her to bristol condition. This is an incredible opportunity to acquire a highly refined sailing vessel in need of honest work.

The interior of this magnificent craft was not affected in any way. It remains 100% pristine.

Check out the last 6 photos.....these neighbor boats were not able to stand up to the storm's fury. I believe this is a testament to the design integrity of the HALLBERG-RASSY MONSUN.


In recent months, this lovely sloop style sailboat has been totally refit. She was surveyed and found in "Near Bristol" condition. She was refit to the highest standards for the purpose of long distance cruising.

All systems were selected for rugged simplicity and self-servicing. The Hallberg-Rassy Monsun 31 is renowned as a sea kindly, stout cruising boat with multiple circumnavigations.

Airhead composting toilet chosen for simplicity. This system is amazing.

There is no Grey water capacity-. The Sink has a strainer for food particles and is connected directly to a thru-hull exhaust

The British Berkfeld Water filter stays with the boat, and is mounted on a custom made gimble with dedicated water supply and bronze hand pump

All minimal electrical needs are met by solar.

You will find that a personal inspection will prove the fitness and beauty of this lovely 31 footer.

The 1974 HALLBERG-RASSY MONSUN needs the right touch ( and a few dollars ) to bring her back to bristol condition. The issues have been described above, as well as being seen in the updated photos.

Many items were recently replaced. A recent survey described this boat as "NEAR BRISTOL" condition.

During the refit, the mast was stripped and rebuilt, a new Selden boom was added, and all rigging was replaced. A break-away solent stay has been added for a hank-on drifter and storm sail. A track has been added to the mast to allow for a storm trysail to be bent on and stowed at the deck ready for deployment. Dedicated halyards are present for all of these sails. A new Schaeffer roller furling system was added for the genoa. New sails (main, genoa, and drifter) built by Port Townsend Sails, the loft of renowned cruising sailmaker Carol Hasse, were added last year. Spliced dyneema lifelines were added with pelican hooks at the stern pulpit.

We have several active listings for Catalina, Hunter, Pearson, and Endeavour. If you're in the Corpus Christi, Kingsville, Portland, or Beeville areas, please use the form on this page to let me know what you're looking for and I'll get back with you today about any other sloop sailboat options we have locally that may meet your needs.

In order to see all 39 photos and more, please quickly create an account. It just takes a second and you will have unlimited access to view information for this listing and ALL others on the website.

In order to see all 39 photos, download a brochure, and more, please quickly create an account. It just takes a second and you will have unlimited access to view information for this listing and ALL others on the website.

† Engine hours were last recorded on 7/24/2017, and may not reflect the most recent readings. Please contact us if you would like up-to-date information.

†† Storage status was last confirmed on 7/14/2017, and may not reflect the most current status. Please contact us if you would like up-to-date information.

Similar Boats to the Hallberg-Rassy MONSUN 31 For Sale

In order to see all 39 photos, download a brochure, and more, please quickly create an account. It just takes a second and you will have unlimited access to view information for this listing and ALL others on the website. If you don't use social media, click here to register with your email.