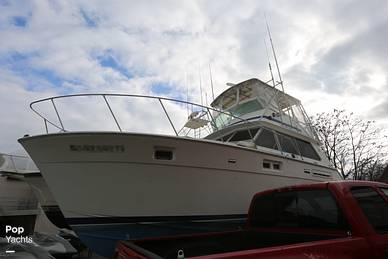 Perhaps lesser known than its 46' bigger sister, the Bertram 42 is a very ruggedly built and good-performing vessel, as attested by Dave Pascoe in his review:

Perhaps lesser known than its 46' bigger sister, the Bertram 42 is a very ruggedly built and good-performing vessel, as attested by Dave Pascoe in his review:

"What makes the 42 an overall better performer is the fact that the hull vee is less than the 46, plus the fact that she'll hold the same size engines. That means that she isn't hobbled by underpowered engines and they are comparatively much faster boats, a feature which nearly everyone likes."

Being able to reach 30 miles per hour and cruise efficiently at 21 while burning only a gallon of fuel per mile is the kind of performance Dave is referring to.

With a solid fiberglass hull weighing 20 tons, this boat is also likely to fare much better in dangerous conditions or major storms. Tales abound of these boats being swept inland in hurricanes and taking out much of what may be in their paths, yet subsequently being restored to service. If you are somebody who goes far out and away from safe harbors this is the boat for you.

Thanks to the 14' beam the cockpit has plenty of room for work, and the fully enclosed bridge has bench and pedestal seating for six or more, terrific visibility and all the needed controls and electronics for the captain.

Inside the salon has large windows and is airy and bright, the down galley is well equipped with a full-sized fridge and a 3-burner stove and oven.

The midships berth has a full-sized bed, the forward cabin is a V-berth, and the head between the two has a stand-alone shower stall.

As to the machinery, twin Detroit Diesel two-stroke, twin-turbo V6 engines deliver up to 335 horsepower to the props via Allison gears, and the Northern Lights Lugger generator delivers up to 8,000 watts of A/C power to handle all domestic systems while away from shore power... and all is in good running condition according to the owner.

Speaking of the owner, he has been renovating this boat over the past few years, he has less available time now to complete the project, let alone use it, so he now, reluctantly, will consider others willing to take over the project, all the heavy lifting has already been completed.

The photos tell the story, the boat has been undergoing interior and ships systems renovations and upgrades.

Structurally sound, all the machinery is in good condition and runs well.

Renovations as described in the "Condition" section, turbos on both engines rebuilt, fuel lines and fittings, some engine instrumentation as well as other plumbing and wiring.

We have several active listings for Sea Ray, Hatteras, Silverton, and Trojan. If you're in the New York City, Brooklyn, Queens, or Manhattan areas, please use the form on this page to let me know what you're looking for and I'll get back with you today about any other sport fishing yacht / fishing boat options we have locally that may meet your needs.

I'm Up Late
Have a Question?
This boat is on people's minds. It's been viewed times in the past week.
Shop With Confidence!
Our company has accomplished so much through integrity, forged with twelve core values.
There is a review of this boat model
Winning in Races Propelled Bertram to Win in Production, Too

In order to see all 164 photos, a video, and more, please quickly create an account. It just takes a second and you will have unlimited access to view information for this listing and ALL others on the website.

In order to see all 164 photos, a video, download a brochure, and more, please quickly create an account. It just takes a second and you will have unlimited access to view information for this listing and ALL others on the website.

One of our experts will contact you to finalize your offer.

All offers are contingent upon the buyer being fully satisfied after the results of a personal and/or professional inspection.

†† Storage status was last confirmed on 12/4/2022, and may not reflect the most current status. Please contact us if you would like up-to-date information.

Similar Boats to the Bertram 42 For Sale

In order to see the advanced metrics, all 164 photos, download a brochure, and more, please quickly create an account. It just takes a second and you will have unlimited access to view information for this listing and ALL others on the website. If you don't use social media, click here to register with your email.