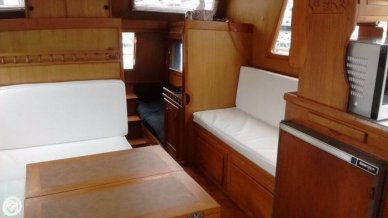 This boat has a great layout with two cabins, two heads, and with the convertible salon settees, she'll sleep a total of 8.

There is also a fully equipped galley and a large flybridge and a ...more

This boat has a great layout with two cabins, two heads, and with the convertible salon settees, she'll sleep a total of 8.

There is also a fully equipped galley and a large flybridge and a lower helm is standard.

Imported by Marine Trader, the CHB 34 remains the best-selling small trawler ever sold in the U.S. market. She enjoyed her best years during the 1970s when fuel prices were increasing and powerboats, with their big, fuel-guzzling engines, were out of favor.

As the years rolled by, however, aging sailors and retired couples rediscovered the CHB 34, finding much to like in her ease of operation and remarkable fuel economy.

The CHB 34 is built on a solid fiberglass hull with a long, prop-protecting keel

The Owner has provided the following information:

She is a good boat; actually, she is a great boat !!

Live aboard with a comfortable forward and aft cabin, each equipped with a head and shower,

A full galley with a 4-burner propane stove and refrigerator.

A perfect boat for the San Juan's that has been through the Inner Passage with her previous owner while I took her up and down between the Sounds and the Columbia River via the coast twice without any problems, proving that she is a very worthy "offshore" ship as well with an approximate range of 800Nm using 1.5 Gph (300G capacity).

She is mechanically sound and we have invested in her generously (over 10K) during the last few years.

The 120 Hp Lehman Diesel (3400 Hrs.) had a major overhaul (03-'18) that included valve adjustment, a complete removal, sandblasting, painting of the raw water cooling system (heat exchanger/exhaust elbow and replacement of gaskets, belts, hoses and pump as well as well as a complete service of the hydraulic system plus a replacement of the starter battery. and oil cooler hoses.

Both heads were completely rebuilt with all hoses, fittings, piping and valves replaced, as well as replacement of the water heater element.

The interior has lots of beautiful teak, mahogany and hardwood floors throughout. There are a few minor spots with water damage, in the aft cabin only, that require some simple resealing of a few window frames and decking to alleviate the issue.

However, have since solved the problem by having over $4000 worth of a custom build covering installed (4/'19) for the entire upper deck (flybridge) as well as the complete aft portion of the boat, including a matching bimini top, to ensure that she is completely dry and as good as covered mooring spot.

The exterior needs a little "cosmetic" care even though most of the "hard labor" has been done for you. It took 70 man-hours to remove 3 layers of varnish from the wood finish.

You would own a very nice boat for well below its valued price that would include an array of extras, including charts and maps plus owner/operating manuals for all systems and equipment.

Advertisement is for vessel only. Trailer is not being offered for sale by Pop Yachts.
Information On Condition

This 1981 CHB 34 Double cabin has new Bimini canvas, and a new winter canvas that covers the flybridge and aft portions of the boat. This should provide excellent winter protection for the boat.

The owner is in the process of finishing all exterior bright-work with Sikkens Cetol Marine, a protective translucent wood finish for boats.

We have several active listings for Mainship, Grand Banks, Sea Ray, and Albin. If you're in the Seattle, Tacoma, Bellevue, or Kent areas, please use the form on this page to let me know what you're looking for and I'll get back with you today about any other trawler / motoryachts options we have locally that may meet your needs. 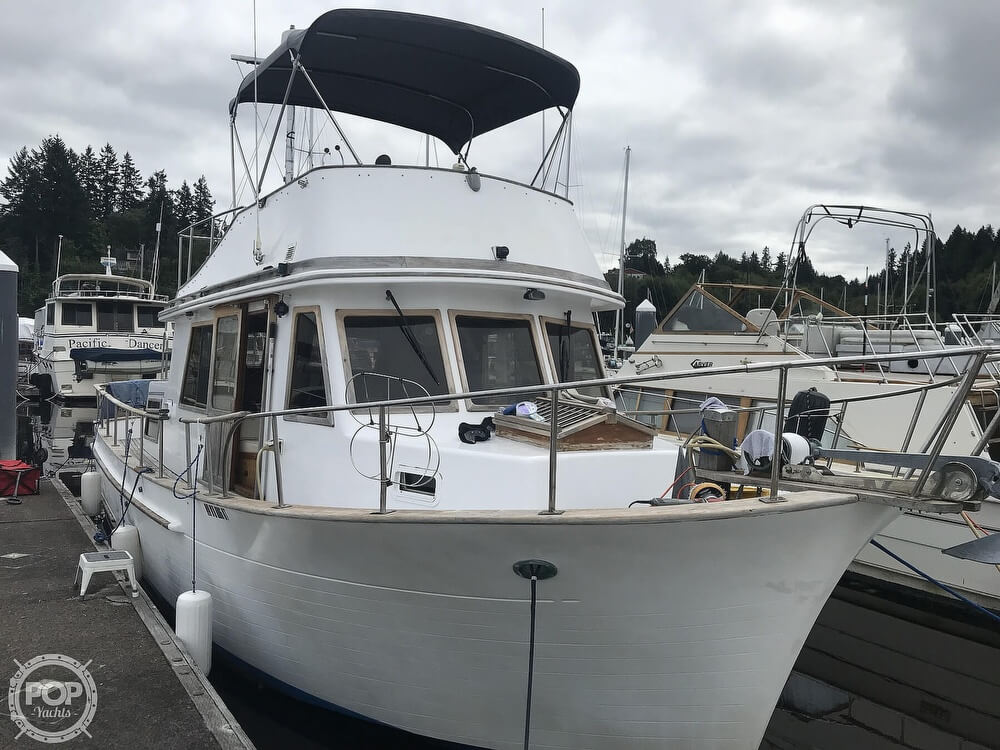 In order to see all 120 photos and more, please quickly create an account. It just takes a second and you will have unlimited access to view information for this listing and ALL others on the website.

In order to see all 120 photos, download a brochure, and more, please quickly create an account. It just takes a second and you will have unlimited access to view information for this listing and ALL others on the website.

†† Storage status was last confirmed on 8/16/2019, and may not reflect the most current status. Please contact us if you would like up-to-date information.

†††† The ad was last updated on 12/20/2020 and hull hours may not reflect the most recent readings. Please contact us if you would like up-to-date information.

Similar Boats to the CHB 34 Double Cabin For Sale

In order to see the advanced metrics, all 120 photos, download a brochure, and more, please quickly create an account. It just takes a second and you will have unlimited access to view information for this listing and ALL others on the website. If you don't use social media, click here to register with your email.