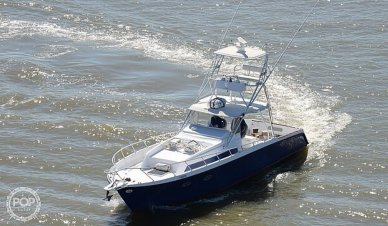 Price drop on a true classic!

This is a classic beauty built on a legendary hull by the world champion Cigarette powerboats.

Welcome to this overview of the 43 Cigarette Huntress.

As written by the seller:

In 1984, Marlin Magazine went to the infamous Cigarette Racing Te...more

Price drop on a true classic!

This is a classic beauty built on a legendary hull by the world champion Cigarette powerboats.

Welcome to this overview of the 43 Cigarette Huntress.

As written by the seller:

In 1984, Marlin Magazine went to the infamous Cigarette Racing Team and asked "If you made a sport fisher, what would it look like?" At that time Cigarette and all the other Go-Fast boats were not making center console fishing boats. They were making pure speed, offshore racers.

Cigarette took the well-proven 42 offshore hull and designed a completely new topside for walk-around fishing. She was re-powered with efficient Caterpillar 3208 diesels and the Huntress name was coined. Unfortunately, in 1984, the design did not meet with instant success. So far as we know, only four of this model were built.

This particular one was later re-powered with new 3208s and a tower added around 1998.

We bought this Cigarette in 2014 in Ft. Lauderdale. She was brought to St. Augustine where extensive re-fitting has taken place. The hull has been completely repainted. All the exterior woodwork has been brought back to life and much of the cabin fiberglass has been resealed. The entire dashboard was replaced with a custom mahogany board, refitting all the instruments. A new Simard chart plotter & depth finder was added to the 48-mile Furuno radar. An additional digital DF, Two Icom VHF radios are installed, one at the helm, and one in the cabin.

The aft deck has a wide open area for fishing. A custom fighting chair is center with six rod holders in the gunwales. More rod holders are overhead, on the tower. The aft deck contains a transom door, that steps out to the molded in swim platform with stainless ladder.

The tower also holds the outriggers and second steering station. Access to the tower is from either side of the cockpit. Tower seats two for all-around visibility and watching the cockpit action. The view forward spans over the large sundeck forward. Custom cushions are aboard for sunning on this area while there is full walk-around access to the anchor area and docking facilities. The open-array radar scanner is on top of the tower cover. She requires at least 21' bridge clearance. Also on the tower is a six person life raft in a canister just ahead of the helm.

The engine compartment is accessible via two large hatches under the upper cockpit. Considerable space is available around the 1998 Caterpillar 3208- diesels driving Twin-Disc transmissions and Nibril 4-blade props. The forward bulkhead has the dual bank battery charger and hydraulic steering canister which services both helms. Aft of the engines is the 300 gallon main fuel tank which fills from the swim platform. A hatch aft of the fighting chair has space for a genset, which is not installed but wired.

The main cabin is entered via a few curved stairs from the left side of the dash. The electrical panels are set into the main bulkhead on the aft cabin wall. The starboard is the galley area, with an under counter refrigerator and storage. A stainless sink and good counter space. Moving forward along the counter is the microwave and ice maker.

To port, is the head and shower. An electric head is concealed under cover to port, and the shower is just forward. The forward part of the cabin has seating for six with a convertible high-low table or one large vee-berth area. Forward of the cabin has a mirrored wall with access to storage for PFDs and gear. The cabin is fully air conditioned with a 16,000 BTU unit concealed under the port berth.

The forward deck has access for anchoring, with a windless and large chain locker below deck. Currently she carries a 35 pound CQR plow anchor with anchor lights in the hull. The anchor is held on a short pulpit which was added and brings the hull length to 43'. Just aft of the anchor area is another molded-in bin which can be used for fenders or as a fish box.

In all, the 43' Huntress was ahead of her time as an offshore fishing platform built on a performance hull with great seakeeping capabilities. Built to legendary Cigarette standards, she feels as solid as any ship her size. The efficient Caterpillar diesels provide long range with very low fuel burn for a 43 footer.

The bottom paint will probably need to be redone as it's over 2 years old. The generator is not installed, but the wiring is.

I did not notice any soft spots as I walked around. Radar is dated but still works according to seller.

Windlass is currently not working, and the fuel gauge in the dash is inoperable, but a remote gauge is installed on the tank itself.

New propellers were installed in 2019.

We have several active listings for Scarab, Fountain, Baja, and Formula. If you're in the Jacksonville, Gainesville, Palatka, or Palm Coast areas, please use the form on this page to let me know what you're looking for and I'll get back with you today about any other walkaround fishing boat / fishing boat options we have locally that may meet your needs. 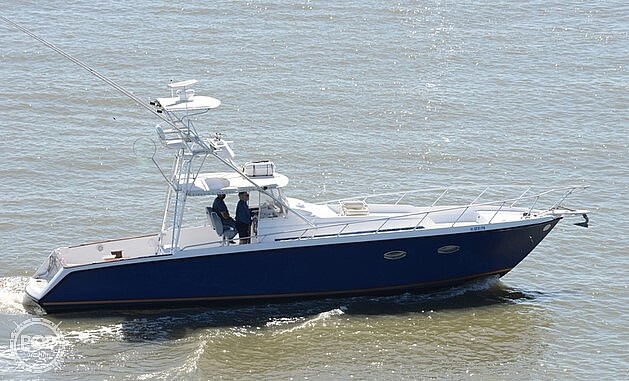 In order to see all 109 photos, a video, and more, please quickly create an account. It just takes a second and you will have unlimited access to view information for this listing and ALL others on the website.

In order to see all 109 photos, a video, download a brochure, and more, please quickly create an account. It just takes a second and you will have unlimited access to view information for this listing and ALL others on the website.

†† Storage status was last confirmed on 5/5/2020, and may not reflect the most current status. Please contact us if you would like up-to-date information.

†††† The ad was last updated on 10/6/2020 and hull hours may not reflect the most recent readings. Please contact us if you would like up-to-date information.

Similar Boats to the Cigarette Huntress For Sale

In order to see all 109 photos, a video, download a brochure, and more, please quickly create an account. It just takes a second and you will have unlimited access to view information for this listing and ALL others on the website. If you don't use social media, click here to register with your email.